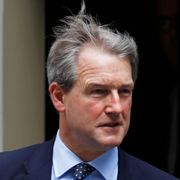 Owen Paterson, a leading Brexiteer who quit as an MP after he was embroiled in a lobbying scandal, is taking the government to the European Court of Human Rights.

The former Tory minister claims the investigation into his conduct breached his right to respect for private life – as enshrined in Article 8 of the European Convention on Human Rights – and that his "good reputation" damaged when the results were made public.

Mr Paterson, who campaigned to leave the European Union and argued in 2014 that the UK should replace the Convention, stepped down after a row over the findings last year.

The UK remains part of the Convention, which the European Court of Human Rights in Strasbourg adjudicates.

Mr Paterson’s case was lodged with the court on 10 May but was made public today, when Rishi Sunak’s spokesman said the government was made aware of it.

The MP, who was Northern Ireland secretary and environment secretary under David Cameron, was found to have breached lobbying rules by approaching and meeting relevant officials a number of times on behalf of Randox Laboratories and Lynn’s Country Foods.

He earned £110,000 a year in total for his work as a consultant for the companies.

Mr Paterson also used his parliamentary office and stationary for his consultancy work and failed to declare his interests in some meetings, the investigation found.

He insisted at the time that his approaches to officials and ministers were whistleblowing, with Randox warning the Food Standards Agency that illegal antibiotics had been found in milk.

The case nearly brought down Boris Johnson’s government after the prime minister defended him and tried to change the rules to prevent Mr Paterson’s suspension as an MP.

In the face of public anger, Downing Street reversed its position and Mr Paterson resigned, saying he had to protect his family.

Court documents say Mr Paterson’s "good reputation" was damaged because the findings by the Parliamentary Commissioner for Standards (PCS) were made public.

They also say the process by which the allegations were investigated and considered "was not fair in many basic respects".

The commissioner "did not hear witnesses, it met in secret, he was given 15 minutes to address the PCS", he was not allowed to have a lawyer present and there was no right of appeal, the documents say.

Sky News has contacted Mr Paterson for a comment.