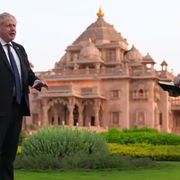 Boris Johnson has insisted he has "nothing to hide" over partygate – as he comes under pressure from MPs debating a fresh investigation into the prime minister.

Speaking to Sky News’ political editor Beth Rigby on his two-day trip to India, Mr Johnson said he didn’t "want this thing to endlessly go on".

His comments came shortly after the government dropped its bid to delay a vote by MPs on whether the PM should be investigated for allegedly misleading the Commons over partygate.

Mr Johnson said: "People were saying this looks as though we are trying to stop stuff coming out. I didn’t want that."

He added: "I don’t want this thing endlessly to go on but I have absolutely nothing, frankly, to hide. If that is what the opposition want to talk about, that is fine."

His comments came as Labour tabled a motion for the PM to be referred for an investigation by parliament’s privileges committee.

The government initially ordered Tory MPs to support an amendment delaying a vote but shortly before the debate took place the amendment was withdrawn and Conservatives were told they would be allowed a free vote.

Mr Johnson – who apologised to MPs earlier this week following his fine for breaking lockdown rules – told Sky News: "What I decided is that if the opposition really want to focus on this, that’s fine.

"What I don’t want to do is have endless discussion about this when we don’t have the conclusion of the Met inquiry.

"We just need to get the thing concluded. If people want further conversation about that, I don’t want to in any way to dissuade them.

"I happen to think that I have made my point, I apologised very much for the FPN [fixed penalty notice] that I received.

"We need to focus frankly on the things that matter to the people of this country directly now."

Asked whether he was hurt by the decision of Steve Baker, a key Brexit-backbench ally, to declare that he should be "long gone", Mr Johnson said: "I understand people’s feelings.

"I don’t think that that’s the right thing to do.

"I think we have got to wait for the conclusion of the report and perhaps I could say a bit more then.

"In the meantime what I would like to do is get on with taking the country forward, making sure that we deal with the immediate problems that we face."

Pressed on whether there were any circumstances when he might resign, the PM said he wanted "to get on with the job", adding: "We have got to get on with the priorities of the people. That is what we are doing."

Asked if he thought partygate was a "storm in a Westminster tea cup", he said: "Of course I think it’s serious and it’s important but I also think that we have massive issues that people expect us to address."

Pressed on whether he was determined to lead the party into the next general election, he said: "Of course I am."

Mr Johnson declined to comment when asked whether he thought that at every event he attended he did not think he was breaking the rules, saying the matter was the subject of an ongoing investigation.