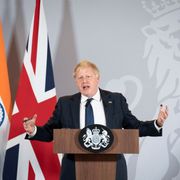 Boris Johnson has said he is sure he will still be prime minister in six months despite further rumblings of backbench discontent over partygate.

The PM has faced repeated questions about his future as the scandal continues to dog him despite his attempts to move on to broader issues during a trip to India.

Another backbencher, Tobias Ellwood – who has already called on Mr Johnson to go – said there had been a "silence of support" and urged Conservatives to "take matters into their own hands".

The declaration of prominent Brexiteer Steve Baker that "the gig’s up" for the prime minister had further added to his woes as MPs on Thursday voted for a parliamentary committee to investigate the claim that he misled parliament over the lockdown-breaking events in Downing Street.

Labour’s shadow Northern Ireland Secretary Peter Kyle told Sky News that the PM’s authority was "draining away" after the government U-turned on an initial attempt to block the Commons vote.

But Mr Johnson has insisted that he has nothing to hide – and has been working on a post-Brexit trade deal with India, declaring that officials had been told to "get it done by Diwali in October".

Asked during a news conference in New Delhi whether he was "absolutely sure" that he would still be prime minister by then, he said: "Yes."

Conor Burns, the Northern Ireland minister and staunch ally of the prime minister, rounded on the PM’s backbench critics, telling the BBC that they included people "who have never really supported the prime minister".

"If the prime minister stepped off Westminster Bridge and walked on top of the water they would say he couldn’t swim. That is a fact," Mr Burns added.

He told Sky News there was "no question of the prime minister going".

The PM is accused of misleading the House of Commons when he initially told MPs that no rules had been broken after allegations of lockdown-breaking parties in Downing Street and Whitehall first emerged.

That claim will now be investigated by parliament’s privileges committee.

Mr Burns said he did not believe that Mr Johnson had lied.

He told Sky News: "I believe that when the full facts are seen, when the context comes out, that it will be clear that the prime minister, every time that he came to parliament, was faithful and genuine and true in what he believed.

"The prime minister told the House what he believed to be the truth in good faith at each stage and when there has been a development subsequent to that, new information, he has corrected the record."

Mr Johnson has apologised to MPs after he was fined last week for attending a Downing Street gathering on his birthday in June 2020, in breach of lockdown rules in place at the time.

Downing Street is understood to be braced for further fixed penalty notices for the PM as a result of the investigation by police into 12 events in 2020 and 2021.

So far, the Met has referred more than 50 cases for the fines.

Lord Barwell, former chief of staff to Theresa May – Mr Johnson’s predecessor in Downing Street – told Sky News that the government’s U-turn on Thursday showed the mood among Tory MPs "isn’t quite as supportive of the PM as maybe some people were having us believe two or three days ago".

He said that the comments from Mr Baker, a key figure in Mrs May’s downfall, were also very significant, adding: "If I was still doing my old job in Number 10, I would be very worried about that intervention yesterday."