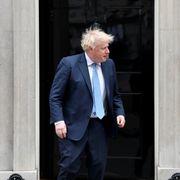 Sir Keir Starmer has branded Boris Johnson "dishonest" and "a joke" as a senior Tory MP said the prime minister is no longer "worthy" to be in his role following his partygate fine.

As Mr Johnson addressed MPs in the Commons for the first time since being issued the fine by the Metropolitan Police for attending his own birthday party in the cabinet room in Downing Street in June 2020, the Labour leader said "the public does not believe a word the prime minister says", and that partygate "is not a glitch in the system".

It came as former Tory chief whip Mark Harper told Mr Johnson he is "no longer worthy of the great office that he holds" and confirmed he has submitted a letter of no confidence in Mr Johnson after he was fined for breaking coronavirus laws.

"I regret to say that we have a prime minister who broke the laws that he told the country they had to follow, hasn’t been straightforward about it and is now going to ask the decent men and women on these benches to defend what I think is indefensible," Mr Harper said.

"I’m very sorry to have to say this, but I no longer think he is worthy of the great office that he holds."

The PM replied: "I bitterly regret the event in Downing Street as I have said, but I do believe that it is the job of this Government to get on with the priorities of the British people and that is what we’re going to do."

Meanwhile Sir Keir – who was reprimanded by Speaker Sir Lindsay Hoyle for calling Mr Johnson "dishonest" – accused Mr Johnson of dragging "everyone else down with him".

He also branded the PM’s apology as "half-hearted".

Reiterating his call for the prime minister to resign, the Labour leader urged Conservative MPs to speak out against the actions of their leader and "bring decency, honesty and integrity back into our politics and stop the denigration of everything that this country stands for".

A no-confidence vote in the prime minister is triggered if 1922 chair Sir Graham Brady receives 54 letters from Tory MPs calling for Mr Johnson to quit.

Addressing partygate for fewer than two minutes in his Commons statement, Mr Johnson offered a "wholehearted apology" and insisted he did not know he was breaking his own coronavirus rules.

Mr Johnson said he was speaking in "all humility" by acknowledging the fine the police issued over the gathering in Number 10.

"I paid the fine immediately and I offered the British people a full apology, and I take this opportunity on the first available sitting day to repeat my wholehearted apology to the House," Mr Johnson said, as he faced shouts of "resign".

"Let me also say, not by way of mitigation or excuse, but purely because it explains my previous words in this House, that it did not occur to me then or subsequently, that a gathering in the Cabinet Room just before a vital meeting on COVID strategy could amount to a breach of the rules.

"I repeat that was my mistake and I apologise for it unreservedly.

"I respect the outcome of the police investigation, which is still under way, and I can only say that I will respect their decision-making and always take the appropriate steps."

Read more:
Johnson may have weathered the storm for now, but the worst could yet be to come

Mr Johnson added that he has taken "significant steps" to change No 10.

"My job is to work every day to make the British people safer, more secure and more prosperous. That is what I will continue to do," the Mr Johnson added.

MPs to vote on whether PM lied on Thursday

Mr Johnson repeated his apology after Speaker Sir Lindsay Hoyle approved a vote this Thursday on whether he lied to MPs with his earlier denials.

Mr Johnson is expected to be on a visit to India when the vote takes place.

Meanwhile, SNP Westminster leader Ian Blackford said the prime minister only apologised because he was caught, describing him as a "serial offender" and again calling for him to resign.

Speaking last week following the fine, Mr Johnson said he "spoke in completely good faith" when he repeatedly said all guidelines were followed in Downing Street.

Asked if he thought more fines were coming his way, he said the media would be among the first to know.

Mr Johnson, his wife Carrie and Chancellor Rishi Sunak were all issued with fines for breaking lockdown rules.

They are all understood to have paid £50 each, a reduced rate as the fixed penalty notices were settled within 14 days.

Mr Sunak offered an "unreserved apology" and also signalled he would not resign.

The fines are the result of a continuing Metropolitan Police investigation into parties in Downing Street and Whitehall in 2020 and 2021.

Police have been investigating 12 events when lockdown rules were alleged to have been broken and so far more than 50 fines have been announced.

Mr Johnson has become the first sitting prime minister to receive a punishment for breaking the law.