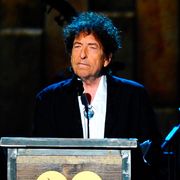 Bob Dylan fans who bought $600 "hand-signed" limited edition versions of his new book are being refunded after it emerged the signatures were actually "in penned replica form", the publisher has confirmed.

Released at the beginning of November, The Philosophy Of Modern Song is a collection of more than 60 essays focusing on songs by other artists, from Elvis Costello to Nina Simone, and is Dylan‘s first book of new writing since 2004’s Chronicles: Volume One – and since winning the Nobel Prize in Literature in 2016.

Buyers of the limited edition books, published in a run of 900 and priced at $600 (about £505), began comparing notes about the signatures, suspecting something wasn’t right, after receiving their copies in mid-November, according to US media reports.

Now, publisher Simon & Schuster has apologised and said buyers will be refunded.

"To those who purchased The Philosophy Of Modern Song limited edition, we want to apologize," the publisher said in a statement posted on Twitter.

"As it turns out, the limited edition books do contain Bob’s original signature, but in a penned replica form. We are addressing this information by providing each purchaser with an immediate refund."

The statement came after complaints from customers. The books had arrived with a letter vouching for the signature’s authenticity.

Dylan finished a run of UK gigs earlier in November, his first tour dates here in more than five years.

Emerging from New York City’s Greenwich Village folk scene in the early 1960s, the singer-songwriter became a counter-cultural figure with the release of a series of political anthems and went on to sell more than 125 million records around the world.

Sky News has contacted a representative for Dylan for comment.