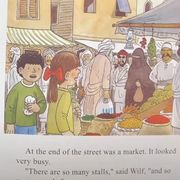 A book from the popular children’s series Biff, Chip and Kipper has been withdrawn after complaints about its portrayal of Muslims.

Copies of The Blue Eye have been pulled by Oxford University Press (OUP) following criticism.

In the book, the young characters are transported to a foreign land with the help of a key and find themselves in a busy street market, which appears to be somewhere in the Middle East.

Wilf, another character, said: "I don’t like this place. It’s scary."

OUP told Sky News that the title was originally published in 2001 and edited in 2012, with the last sentence of the text on the page in question changed to read: "It would be easy to lose each other in such a crowded place."

The book was taken out of circulation in March this year after an independent review and is no longer available to buy, the publisher said.

"OUP destroyed its own remaining stock of the book, although a small number of copies may still remain in the supply chain; some older titles may still be available in libraries, or as second-hand copies," OUP said.

"At OUP, we regularly review and make changes to our list of titles to ensure they are up-to-date, diverse, inclusive, and reflective of the world we live in, and we take steps to remove any products that are no longer appropriate from our collection.

"We also continuously listen to feedback from our customers, and we take our responsibility to learn and improve very seriously.

"We have invested and are investing in our team’s development to create more inclusive content and are working with experts on all D&I characteristics to drive improvements on existing and new content/titles."

The Biff, Chip, Kipper and Floppy the dog series was first published over 30 years ago and according to OUP, is read by 30 million children globally.