Biden-Xi meeting: With Taiwan, North Korea and Hong Kong dividing them, what did China want from talks with the US at the G20 in Bali? 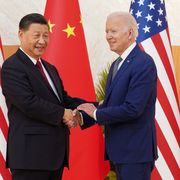 The stakes were high ahead of the meeting between President Biden of the US and President Xi of China.

It’s being seen as a test of sorts on whether the two leaders can find a way to halt the spiralling deterioration of relations between their two countries.

While the Americans pre-briefed the press about what they wanted to gain from the meeting, it is always harder to glean what the Chinese intend. While it’s possible Xi’s immediate objectives are not as far removed from Biden’s as might be expected, the longer term views are harder to reconcile.

The context is that relations between the two superpowers are the worst they’ve been for decades, some say, as bad as they have been since the US formally recognised the Communist Party’s government and established full diplomatic relations in the late 1970s.

The list of issues that divides them is long and opinions are entrenched; from Taiwan, to Hong Kong, North Korea, and trade and technological development.

Neither side expressed any great optimism about this meeting ahead of time. Indeed, a significant breakthrough was considered highly unlikely.

But there were vague hints that there is some common ground over, at least, the need communicate.

Xi’s opening comments stressed the importance of face-to-face exchanges and emphasised the fact that the world is watching. It "expects China and the United States will properly handle the relationship", he said.

That statement is likely to be more pointed than self-reflective. House Speaker Nancy Pelosi’s recent visit to Taiwan, the self-governing island China sees as its own, was enraging to the Chinese and labelled highly "irresponsible". It was after her visit that ongoing conversations about issues such as climate change were halted.

However, China does takes its position on the world stage very seriously. It wants to be seen as a global leader and treated as such. After an extended period of isolation bought about by its strict zero-COVID policy, President Xi likely acknowledges the importance of being seen again at high level meetings like this.

There is also quite possibly a quiet acknowledgement among China’s leaders that while it won’t compromise on many issues it holds dear, any sort of conflict with America would be disastrous.

Read more:
Joe Biden meets Xi Jinping as he says US and China have ‘responsibility’ to ‘manage our differences’
Russian foreign minister Sergei Lavrov appears in video amid reports he was taken to hospital after arrival at G20

Indeed, there is clear evidence that Xi wanted this meeting to happen. Months of quiet diplomacy would have been needed to pave the way for it and that wouldn’t have been possible without will from the very top.

However, a shared desire to keep the lines of communication open may well be as far as things go.

The real problem is that it’s not just a series of issues that divides China and the US at present.

Underpinning those issues is a deep mistrust over each other’s fundamental motivations.

The Chinese believe that America has a strategic interest and, indeed, policy of trying to contain China, to keep it down and to prevent it from being the economic and geopolitical kingmaker it would like to be.

America believes China wants to promote authoritarianism around the world and stamp out US interests in Asia.

While both might recognise the importance of the relationship for global stability, these remain very difficult ideological positions to reconcile.