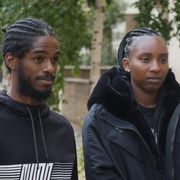 Five police officers face the sack over the stop and search of two athletes who were driving through London with their three-month-old baby in the back seat.

Footage of the search, during which the couple were handcuffed, was shared on social media and later Ms Williams accused the police of having racially profiled the pair.

After the search on 4 July 2020, details of the couple’s three-month-old son were also stored on a police database called Merlin, used to record information on children who become known to the authorities.

The Independent Office for Police Conduct (IOPC) said a police unit had followed the couple as they drove through Maida Vale, west London, before stopping them and searching the couple for weapons and Mr Dos Santos for drugs.

Regional director Sal Naseem said: "All five officers – an acting police sergeant and four police constables – will face allegations they breached police standards of professional behaviour for duties and responsibilities and for equality and diversity.

"Four of them also face allegations that they breached the standards for use of force and for authority, respect and courtesy.

"These matters were assessed as gross misconduct so it will be for the disciplinary panel, led by an independent legally qualified chair to determine whether or not the allegations are proven."

If gross misconduct is proven, the officers could face the sack.

A sixth officer will attend a misconduct meeting with force bosses over alleged breaches of the standards for authority, respect and courtesy, duties and responsibilities and for use of force, assessed as misconduct.

Deputy Assistant Commissioner Bas Javid, from the Met’s directorate of professionalism, said: "I acknowledge the IOPC’s direction in this case. We have cooperated fully with the IOPC’s investigation and, in accordance with their direction, are now arranging for an independently-led misconduct hearing to take place.

"I am sorry for the distress that this incident clearly caused Ms Williams and Mr Dos Santos."

Sadiq Khan, the mayor of London, said: "This incident was understandably deeply distressing for Bianca Williams and Ricardo Dos Santos, and I, like many Londoners, was disturbed by the footage of what happened.

"I welcome the independent investigation by the IOPC and its findings. It is important there is no further delay and these officers now face gross misconduct proceedings as soon as possible.

"This case is yet another example of why it is vital that the next Commissioner has a more effective plan to tackle the serious cultural issues within the Met Police and to regain the trust of Londoners."