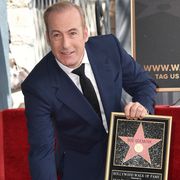 Better Call Saul star Bob Odenkirk admitted he used to pretend he hated "all things Hollywood" as he was honoured with a star on the Walk of Fame.

The actor, 59, joked at the ceremony on Monday night about when he first arrived in Hollywood.

"When I first got here in 1987 and I walked around the Walk of Fame, I pretended to have great and powerful disdain for all things Hollywood," he said.

"I walked in the streets with my nose high in the air, scoffing at every symbol of Hollywood and fame and famous people and celebrities and everything about it that was so big and distant."

He said he still pretends to disdain it, but that deep down "I love making fun of Hollywood and being part of it".

His star was placed next to the one honouring his Breaking Bad co-star Bryan Cranston.

Odenkirk’s other acting credits include Fargo, The Larry Sanders Show and Curb Your Enthusiasm.

He also co-produced The Simpsons, which scored him an Emmy nomination in 2013 for an outstanding animated programme.

The Walk of Fame ceremony coincided with the beginning of the sixth and final season of Better Call Saul, the hit prequel series to Breaking Bad.

"I’m honoured, and I can’t believe it," Odenkirk told the audience. "It makes me really happy inside but I’m not going to admit it – not here, not ever. And I will never, never say it into a microphone where people can hear me. So thank you so much for this honour, thanks."

He went on to reflect on how his ambition and driven lifestyle may have contributed to a recent health scare that changed his outlook.

Last July, the actor suffered a heart attack on the set of Better Call Saul in New Mexico.

Odenkirk said: "It’s especially pertinent in the modern world we live in where the idea of being constantly driven is sort of just an accepted game plan for every day of your f***ing life."

He added: "The people we celebrate are people who wake up at 4am and work out for an hour and and eat kale and do yoga and then try to own the world. That’s super cool in some ways, and in some ways it’s kind of gross and sick and misses the point."