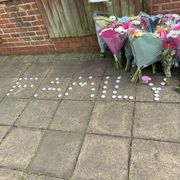 Candles spelling out the word ‘family’ have been left on the pavement near where four relatives were stabbed to death in a house in southeast London.

Denton Burke, 58, and his partner Dolet Hill, 64, were both killed at their home in Delaford Road, Bermondsey, in the early hours of Monday.

As this community comes to terms with the loss of the four people, details about who they are and what they loved are beginning to emerge.

Mr Burke was a "bubbly" man who "loved to cook" – his speciality being his jerk chicken and rice.

His sister, Julieth Hutchinson, says she was last with him on 12 March, celebrating Ms Hill’s birthday.

She is still struggling to come to terms with the death of her brother but says she wants to remember "his beautiful smile" and laughter.

Chyloe Daley, 26, Mr Burke’s niece, says the four deaths have "affected all of us quite badly".

"It’s the brutality of it all that hurts the most," added Ms Daley, who says he was a "great husband, father and uncle".

We heard more too about Ms Hill.

She worked as a housekeeping assistant for Guys and St Thomas’ in their pharmacy department for 21 years before retiring in 2018.

In a statement, they described her as a "well-respected colleague" who helped others in the workplace as an "active UNISON representative".

They added that: "Our thoughts are with Dolet’s family, friends and all who worked with her."

These tributes are echoed on the streets surrounding the three-bed terraced house where the four people lost their lives.

Neighbours said the family were "lovely" and were shocked something so awful, happened so close.

A 28-year-old man from Lewisham, who is suspected of carrying out the fatal attack, is in hospital in a stable condition.

He was tasered by Metropolitan Police officers before his arrest.

Read more:
All victims identified and suspect under arrest in hospital, police say
‘Parents are scared for their children’s lives’ says neighbour