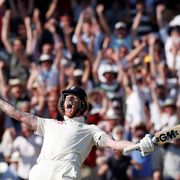 Durham’s Ben Stokes has been appointed captain of the England men’s Test team by the England & Wales Cricket Board (ECB).

He succeeds Joe Root in becoming the 81st captain of the England men’s Test team.

The ECB’s interim chair and CEO approved the appointment on Tuesday evening following the recommendation by the managing director of England men’s cricket, Rob Key.

The decision is not believed to have been taken lightly due to the 30-year-old’s workload as an all-rounder and that he took a four-month mental health break from the sport last year.

However, the only other captaincy options lacked experience, form or a current place in the team.

Stokes will lead England into the summer Test calendar, starting with New Zealand on 2 June at Lords.

Arguably, his most memorable innings was in 2019 against Australia at Headingly, where England appeared to be heading for certain defeat after being bowled out for a first innings score of 67.

Stokes overturned the Australian lead, hitting 11 fours and eight sixes to win with an unbeaten 135 not out – sharing a 73-run partnership with last man Jack Leach.

Key said: "I had no hesitation in offering the role of Test captain to Ben.

"He epitomises the mentality and approach we want to take this team forward into the next era of red-ball cricket.

"I am delighted that he has accepted, and he is ready for the added responsibility and the honour. He thoroughly deserves the opportunity."

Tom Harrison, ECB CEO, said: "I am delighted that Ben has agreed to become England men’s Test captain, which is another great achievement in his extraordinary career in an England shirt.

"He cares deeply and passionately about what it means to represent England and he will lead us into a new era with great pride. It’s an important summer for our Test side and Ben will I am sure relish the challenge before him and his team."

Stokes was named vice-captain in February 2017 and also stood in as captain when Root was absent for the birth of his second child in the summer of 2020.

‘Root has been a massive part of my development’

Stokes said he is "honoured to be given the chance to lead the England Test team".

"This is a real privilege, and I’m excited about getting started this summer," he said.

"I want to thank Joe (Root) for everything he has done for English cricket and for always being a great ambassador for the sport all across the world.

"He has been a massive part of my development as a leader in the dressing room, and he will continue to be a key ally for me in this role."

Stokes will speak to media outlets next week in Durham.

Key’s next job is to appoint specialist red and white-ball head coaches.

First draft interviews are not scheduled for another fortnight.

Former South Africa and India head coach Gary Kirsten, currently working with Indian Premier League franchise Gujarat Lions and Hundred side Welsh Fire, has once again emerged as an option to take on the red-ball role four years after being rejected by England.

Kirsten is understood to have lost out to Chris Silverwood on the strength of his interview in 2018, but both parties could be ready to take a fresh look at the situation.

Key will then need to provide some clarity on the coaching structure beneath the new format-specific heads as well as the selection panel.

His predecessor, Ashley Giles, dissolved the role of a national selector and concentrated those powers in former head coach Silverwood.

Key, who has strong recent links to the county game, could restore the position in a bid to offer an independent voice around the availability of multi-format players.

One longer-standing vacancy is also reportedly close to being filled, with Ron Khalifa mooted as incoming ECB chair.

Ian Watmore stepped down in October after little more than a year as the organisation’s first salaried chair, with Khalifa responsible for leading the nominations committee.