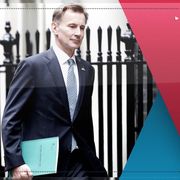 There is so much about today’s autumn statement that hurts the head.

The job of today’s statement – the reason it was urgent and necessary and painful – is because there was a huge black hole in the public finances that was unsettling the markets and pushing up government debt.

Yet – amazingly – for the next two years Jeremy Hunt announced the Sunak government will overall spend more money, not less.

A jaw-dropping change of tack

Yes, there are big immediate tax rises that many including Tory backbenchers will hate (£7.4bn worth in the next financial year, for example). But this is offset by an incredible £9.4bn of additional spending on energy help, school budgets, social care and the NHS. A jaw-dropping change of tack.

The argument by the chancellor is that a near-term boost to spending is needed to dampen the recession we are now in and keep more people in their jobs. It’s just a very different message from the one we’ve been hearing for the last month.

Incredibly, as Sky News revealed last night, Mr Hunt is even keeping the Liz Truss Energy Price Guarantee and extending it for another year – the very scheme due to be junked in March because it was too risky. That’s quite something, one month after he binned it dramatically on TV.

There is, however, much more theoretical pain, though not yet. In order to calm the markets, the Sunak government is promising an incredible squeeze will begin after an election.

Yes there will be a small 1% real terms increase in budgets after 2025, but that’s much less than then chancellor Rishi Sunak promised in March, and after a decade of pain.

This creates an accountancy bonanza: it means Mr Hunt is able to say he’s saved a theoretical £27bn in 2027, reducing theoretical future borrowing costs. But is this fantasy, because nobody can make promises about public spending that far ahead, given not a word of either the Labour or Tory manifesto has been written.

A trap for Labour

So in some regards, today’s autumn statement is a trick, a magician’s prestige, aimed not so much at the public but at the markets.

Will they buy it? Will investment houses upon which the UK depends simply trust the sombre seriously seeming spectacle of Mr Hunt and Mr Sunak more than the Truss-Kwasi double act, even if the actual numbers don’t pass muster? Actually there’s a chance they do, and in that sense it works. But it might not. It’s a gamble.

All of this feels very reminiscent of the way George Osborne would approach his budgets – no wonder he’s been seen going into Downing Street in recent weeks and his old lieutenants are advising Mr Hunt behind the scenes.

The trademark Osborne move embedded in today’s decisions is to set a trap for Labour. By doing a Labour-friendly set of tax rises which focus on the richest, then squeezing spending in the next parliament, Mr Sunak and Mr Hunt want to challenge Labour. If they want to go into the next election promising to spend more on public services, where will they get the cash, they will ask. It’s a dilemma, and it’s unclear how Labour will answer.

But again this is a gamble. The short-term tax rises are real – taking us to the highest tax burden since the Second World War – while the increase in the amount people will pay on energy will go up and mortgages are still rising, and public sector pay still squeezed. The Office for Budget Responsibility suggests a 7% real terms drop in living standards next year. This will all feel very real.

Perhaps by the next election, Labour will be put on the spot and have to justify where tax rises will come from. But maybe people will be feeling the squeeze to such a degree they want change without needing to interrogate too much the alternatives.

That’s the battle to be fought out at the next election.