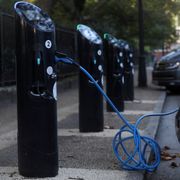 Electric vehicles will no longer be exempt from vehicle excise duty (VED) from April 2025, as part of key policy changes in the autumn statement.

The chancellor says he wants to make motoring taxes "fairer" as half of all new vehicles are forecast to be electric by that date.

Jeremy Hunt’s autumn statement also included details of company car tax rates, which will remain lower for electric vehicles (EVs) than petrol or diesel, but then increase by one percentage point for three years from 2025.

VED is a tax applied on every vehicle with the most polluting paying more, but rates are based on other factors, including the list price.

Until now electric vehicles (EVs) have been exempt, but the annual VED charge for cars will now be £10 in the first year, then £165 from the second year of registration onwards. The cost for electric vans will be £290.

The RAC’s head of policy, Nicholas Lyes, said it was "probably fair the government gets owners of electric vehicles to start contributing to the upkeep of major roads from 2025" but also "a first year zero-VED rate benefit should have been retained as a partial incentive".

President of the AA Edmund King believes the tax hike "is acceptable if other incentives for the transition to EVs remain in place" but VED "should still be lower than for diesel or petrol vehicles" fearing that "increasing tax rates, will slow the road to electrification".

The motoring group says its research showed surging electricity prices were a factor in deterring or delaying over 70% of drivers from going electric.

Ian Plummer from Auto Trader agreed, saying: "The chancellor is clearly looking for revenues, but the prospect of additional running costs will drive more would-be buyers away from EVs.

"Drivers can still save £80 every 1,000 miles by going electric, but this hike takes away a big chunk of those savings."

Sales of new petrol and diesel cars and vans in the UK will be banned from 2030, although EV sales have slowed in recent months, according to the Society of Motor Manufacturers and Traders.

The number of registrations during the first three months of the year was 102% more than during the same period in 2021, while they fell to 38.4% at the end of October.