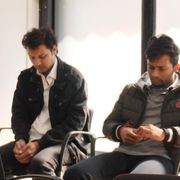 Asylum seekers have warned they are willing to go into hiding to avoid being sent to Rwanda for processing.

As word spreads about the scheme in the days since it launched, legal advisers told Sky News that people are trying to withdraw their asylum applications.

Geeth Kulasegaram said people were panicking and scared and that the scheme could "backfire".

He said: "I started receiving numerous calls from various types of asylum seekers – people who are newly arrived in the UK, people who claimed asylum recently, and people who are thinking of claiming asylum.

"We always advise people who are illegal to get in touch with the Home Office as soon as possible and regulate their status one way or the other.

"There are people who are seriously thinking about going into hiding and people who already claimed asylum and are thinking of withdrawing their application and going underground.

"So this is actually going to backfire and encourage more people to go into hiding because they don’t want to go to Rwanda."

In his office, we met two men from Sri Lanka who said they were terrified about what will happen to them.

Both sat nervously waiting to get some help with their case. One stared into space, the other twiddled his fingers anxiously and from time to time put his head in his hands.

‘I need to hide because I can’t go to Rwanda’

Vithura had begun the paperwork to start his asylum claim before the Rwanda plan was revealed and now wants to stop the claim from being lodged.

I asked him he was frightened. "Very much," he replied. "Yes."

Sitting next to Vilthura was Nilakjan, who also wants his asylum application withdrawn.

"I haven’t been able to eat properly or sleep thinking about what’s been announced," he said.

"I need to hide because I can’t go to Rwanda."

Their legal advisor said Tamils in Sri Lanka were still facing persecution that forces people to risk their lives using illegal routes to get to the UK.

Hanver, also from Sri Lanka, is already in hiding – one of an estimated million undocumented migrants living illegally outside of society without any status.

He had been considering trying to legalise his status by applying for asylum, but said he now could not risk being sent to Rwanda for his application to be processed.

Like many others, he simply does not believe the government’s view that Rwanda is a safe country that will give a fair hearing and treat him well.

It’s a country they know nothing about – apart from its own difficult history. Neither does he want to spend the rest of his life – if his application is successful – in Rwanda.

Hanver said: "Please don’t send me to Rwanda. I don’t want that life. England is a safe country and I need to stay here."

How the UK’s Rwanda plan mirrors policies in Australia, Israel and Denmark

The Rwanda plan is another attempt to stop people travelling to the UK illegally.

After 21 years trapped in the asylum system, Yogaraja Ponniah personifies a system which even the government admits is broken.

For five of those years he’s lived illegally.

After being threatened with deportation he’s had four spells in detention centres and made multiple asylum applications with the Home Office, reapplying after being rejected.

He said he is still waiting for the Home Office to settle his status after a recent court order in his favour.

With tears in his eyes, he told us he fled persecution in Sri Lanka but that the UK government "spoilt" his life.

"My life is gone because of the immigration system. They never do anything," said the 48-year-old.

"At my age people live nicely. I’m struggling. Every single minute is painful. Not one or two or five years – 21. Half my life is gone."

In response to Yogaraja’s case, the Home Office told Sky News his initial application was processed in four months and his right to remain in the UK is being processed

A spokesperson said: "This world-leading Migration Partnership will overhaul our broken asylum system, which is currently costing the UK taxpayer £1.5bn a year – the highest amount in two decades.

"It means those arriving dangerously, illegally or unnecessarily can be relocated to have their asylum claims considered and, if recognised as refugees, build their lives there.

"There is nothing in the UN Refugee Convention which prevents removal to a safe country. Under this agreement, Rwanda will process claims in accordance with national and international human rights laws."