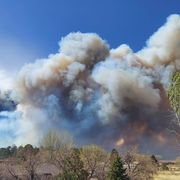 More than 700 homes have been evacuated as a "wall of fire" including flames as high as 100ft (30m), swept across parts of Arizona.

The fires, driven by winds of up to 50mph, laid waste to an area of scattered homes, dry grass and Ponderosa pine trees on the outskirts of Flagstaff in northern Arizona.

Officials in Coconino County said on Tuesday evening that 766 homes had been evacuated and 1,000 animals removed from danger.

An emergency has been declared, officials said, after the wildfire expanded from 100 acres (40 hectares) on Tuesday morning to more than 6,000 acres, or nine square miles by evening "due to extremely high winds".

As ash rained from the sky, the sheriff’s office said around 25 structures had been consumed but more than 10 times that number were threatened.

"But depending on the intensity of the fire, fire can still move across cinders."

Once the flames subside, officials said they will be able to find out whether anyone was injured.

Firefighters and law enforcement officers went door to door telling people to evacuate but had to pull out to avoid getting stuck, Coconino County Sheriff Jim Driscoll said.

His office received a call about a man who was trapped inside his house, but firefighters could not get to him and Mr Driscoll admitted "we don’t know if he made it out or not".

Shelters have been set up for those forced to flee, as well as for animals, including goats and horses.

A much larger wildfire broke out in the same area in 2010, but local woman Kathy Vollmer said: "This time was different, right there in your backyard."

She said she and her husband grabbed their three dogs but left a couple of cats behind as they faced what she described as a "wall of fire".

Another resident, Ali Taranto, said: "To see flames several yards away from your property line and to hear the propane tanks bursting in the background, it was very surreal. Ash falling down. It was crazy," she said.

Earlier in the day, the wildfire shut down US 89, the main highway between Flagstaff and far northern Arizona, and communities on the Navajo Nation.

Aircraft that could have dropped water and fire retardant were grounded by the winds, which are expected to remain high for the rest of the week, the National Weather Service said, along with warmer-than-average weather and low humidity.

Investigators don’t know yet what caused the fire, which started on Sunday afternoon 14 miles northeast of Flagstaff.