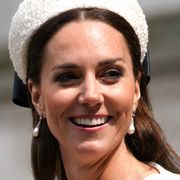 The Duchess of Cambridge made a surprise appearance at a service of commemoration marking Anzac Day.

Kate joined her husband the Duke of Cambridge in honouring Australia and New Zealand’s war dead on Monday.

The couple were welcomed to Westminster Abbey by the Dean of Westminster and gathered with hundreds of guests from Australia and New Zealand’s communities in the UK.

Anzac Day, which falls on 25 April every year, marks the anniversary of the start of the Gallipoli landings during the First World War and is a national day of remembrance for Australia and New Zealand.

Its legacy is the celebration of the "Anzac spirit", which marks courage, endurance, initiative, discipline and mateship – shown by the Antipodean troops.

The Dean, the Very Reverend Dr David Hoyle, said to those gathered in the Abbey: "Today we gather to remember what must never be forgotten. We are also here to honour not just bravery, but common cause. We will reflect on the complex history that makes allies and enemies and leads us through war and peace.

"We remember the loyalties that bound the men and women of Gallipoli together. We think of their courage at a time when we are conscious of a very different conflict and of other challenges.

"We look around and find reason to pray for those caught up in war today. We look back and remember the recent anxieties, loyalties and demands of a pandemic which is not yet over.

"Knowing that trust, respect, service and resilience are virtuous acts, we commit ourselves once more to a renewed determination to seek peace and to work together for the good of all."

A Kensington Palace spokesman said the duchess was able to attend the service "as a result of changes to the diary."