Annual MOT could be scrapped amid cost of living crisis 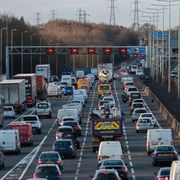 Grant Shapps has not ruled out the prospect of annual MOT checks being scrapped under government plans to ease the cost of living for households across the country.

On Tuesday, Boris Johnson held a cabinet meeting in which he asked his top team to come with "innovative" ideas to help ease the pressure on household finances which do not require government spending.

Sky News understands that transport secretary Mr Shapps mooted the idea of moving from an annual vehicle check to a check every two years.

Annual MOT could be made bi-annual

Pressed on the reports by the Transport Committee on Wednesday, Mr Shapps said: "I don’t rule anything out."

"I saw the newspaper reports this morning. I wouldn’t want to comment on Cabinet discussions and whatever we do by way of things like MOTs would have to fit a very rigorous safety standard," he said.

"But I think the committee will recognise that I’m always looking to do things which assist, particularly with the cost of living – so just in the last week we’ve had the Great British Rail Sale

"I’m always looking at things that can assist, but I’m certainly not in a position to make specific announcements about those things."

He continued: "I don’t rule anything out, if you look at things like MOTs – cars have clearly become a lot more reliable than when the MOT was put in place.

"So I think it’s always right to keep these things under review, but there’s a lot of road to cover before we get to that point."

‘I don’t rule anything out’

The proposed change could save motorists up to £55 annually.

But it is understood that not all cabinet ministers at the meeting supported the idea, with at least one objecting on the grounds that inefficient cars burn more fuel.

Some industry experts, including motoring body the AA, have also warned such a move could lead to higher repair bills for drivers who do not catch problems early enough.

"Though well intended, moving the yearly £55 spend on an MOT to every two years could make costs worse for drivers with higher repair bills, make our roads more dangerous and would put jobs in the garage industry at risk," a spokesperson for the motoring body said,

Millions of people in Britain are facing an increase in energy bills, council tax and the effects of a National Insurance tax rise – as well as inflation hitting a 30-year-high of 7% earlier this month.

After the PM’s cabinet meeting on Tuesday, Number 10 announced that Mr Johnson will chair a committee with the aim of tackling the cost of living crisis "in the next couple of weeks".

The membership of the Domestic and Economic Strategy Committee, which is not new, includes the prime minister, Chancellor Rishi Sunak and Cabinet Office minister Steve Barclay.

Read more:
The four simple changes you can make to save £400 on your energy bills
Five million households now in ‘fuel stress’ as energy price cap rises to almost £2k

The prime minister’s official spokesperson confirmed ministers talked through "a number of ideas" to ease the pressure on household finances which will "feed in to a more formal process".

Govt will have ‘more to say’ on childcare

A future announcement on childcare aimed at easing the financial burden faced by many families was also hinted by Number 10.

Asked about the childcare measures, the PM’s official spokesperson added: "I think all I can say is that this is an area where the government recognises there is more to do.

"There is live policy work taking place and I’m sure we’ll have more to say in the future."

Speaking on Wednesday, Justice Secretary Dominic Raab told Sky News "there is a whole range of things" that ministers are looking at to ease the financial burden increased living costs are putting on households.

"We’re going to continue unflinchingly to look at what more we can do – and the reason being is we understand the pressure that families up and down the country are facing," he said.

According to new figures released by the Office for National Statistics this week, almost nine out of 10 adults say they have seen a rise in their cost of living – compared to 62% in November last year.

On Monday, supermarket groups Asda and Morrisons announced efforts to help struggling shoppers during the cost of living crisis.