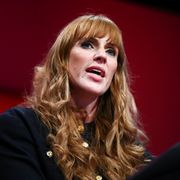 Angela Rayner has said a Mail on Sunday article that claimed Tory MPs had accused her of a Basic Instinct ploy to distract Boris Johnson was "misogynistic", "sexist" and "steeped in classism".

Speaking on ITV’s Lorraine, Labour’s deputy leader said she was "crestfallen" upon hearing that the paper planned to publish the story and described constantly having to "prove my worth" as a female in politics.

Describing the article as "disgusting", Ms Rayner said the piece "wasn’t just about me as a woman, it was also steeped in classism and about where I come from, where I grew up".

She added that despite feeling "really sad" about the story over the weekend, she has been "heartened" by the reaction from members of the public.

Politics Hub: PM urged to come up with new ideas to ease cost of living crisis

Labour’s deputy leader also revealed she had made a conscious decision to wear trousers for the TV interview on Tuesday morning and called for a "culture change" in parliament.

The story, which reported that Tory MPs had accused Ms Rayner of deliberately distracting Mr Johnson by crossing and uncrossing her legs, has received a huge backlash after its publication.

Reacting to the article at the weekend, the prime minister posted on social media: "As much as I disagree with Angela Rayner on almost every political issue, I respect her as a parliamentarian and deplore the misogyny directed at her anonymously today."

Culture in parliament ‘sexist and misogynistic

Posting a dignified response to the article on social media on Sunday morning, Ms Rayner thanked those for criticising the piece and "making a stand in the name of decency".

"I won’t be letting their vile lies deter me. Their attempts to harass and intimidate me will fail," she added.

Also condemning the article, Labour leader Sir Keir Starmer said: "The sexism and misogyny peddled by the Tories is a disgraceful new low from a party mired in scandal and chaos."

He added: "We have got to change the culture. The culture in parliament, it is sexist, it is misogynist. We need to change it."

Speaking to broadcasters on Tuesday, the Labour leader said: "I have got a young girl and I worry about her seeing this environment. We have to change it."

After being contacted by Caroline Nokes, the Tory chair of the women and equalities committee, who raised her concerns on the matter, Commons Speaker Sir Lindsay on Monday summoned David Dillon, the editor of the Mail on Sunday, for a meeting.

Sir Lindsay told MPs that the story was "demeaning" and "offensive to women in parliament", adding that it "can only deter women who might be considering standing for election to the detriment of us all".

He said he had arranged a meeting with Mr Dillon, the newspaper’s political editor Glen Owen and the chair of the press lobby "to discuss the issue affecting our parliamentary community" and will also separately meet Ms Rayner.

‘An attempt to silence women’

Labour’s Harriet Harman said: "If people were in a workplace, a private company and one was briefing against another to the press that would be regarded as serious misconduct. But you look in our own code of conduct, which I’ve got here, and it’s got nothing, nothing in it at all about that.

"It’s all about, you know, not taking public money, which is important and not abusing your staff, which is important, but here it needs a bit of updating. I’ve been leafing through it, and it’s got lots of good things in it, but it actually needs to deal with this as well."

Ms Harman also told Sky News the comments in the Mail on Sunday amounted to an accusation of "flashing".

Meanwhile Commons Leader Mark Spencer said anonymous Tory MPs who spoke to newspaper about Ms Rayner acted in an "inappropriate" way, but did not break any parliamentary rule.

He told the Commons Committee on Standards that he believed those speaking to the newspaper breached "lots" of the principles of public life, including "leadership" and "integrity", but added: "I don’t suppose they’ve broken any rule in the House or committed a crime that could be charged in general society."

In a tweet on Monday, the Independent Press Standards Organisation, the independent regulator of UK newspapers, said it had received "a high volume of complaints" about the article.