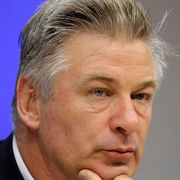 Cinematographer Hutchins died after a prop gun held by Baldwin fired a live round during rehearsals in October 2021.

The actor was one of the producers of the Western, as well as its star.

"This is a complete failure of the employer to follow recognised national protocols that keep employees safe."

The report included testimony that managers took limited or no action over two previous misfires on set.

It also documented safety complaints that went unheeded and said weapons specialists were not allowed to make decisions about extra training.

The company’s documents indicated it would follow guidelines but it failed to do so, added the Occupational Health and Safety Bureau (OHSB) report.

Not bringing live ammo onto any studio or lot; holding daily safety meetings when guns are used; and that staff "refrain from pointing a firearm at anyone" except after consulting the armourer or other safety rep.

Rust Movie Productions said it disagreed with the findings and planned to appeal.

Lawyers have said the gun fired after Baldwin pointed it at Ms Hutchins during a scene set-up. The film’s director, Joel Souza, was also injured.

Baldwin has said he was pointing the gun at her instruction and that it went off without him pulling the trigger.

The report said assistant director David Halls, who served as safety coordinator, had passed Baldwin the revolver without consulting weapons specialists during or after the moment it was loaded.

After the report’s release, his lawyer said it "exonerates" Baldwin by "making clear that he believed the gun held only dummy rounds" and that he had "no authority" over the safety matters highlighted.

"We are confident that the individuals identified in the report will be held accountable for this tragedy," said Luke Nikas.

"Everyone responsible for what happened on that production which led to the tragedy should hang their heads in shame," said Ms Allred.

A separate investigation into possible criminal charges is ongoing.