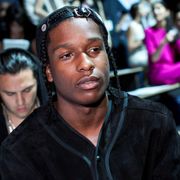 Rapper A$AP Rocky has been detained in California in connection with a shooting in Hollywood last year, authorities have said.

The 33-year-old, real name Rakim Mayers, was detained on suspicion of assault with a deadly weapon, the Los Angeles Police Department said in a statement on Wednesday.

He was held at Los Angeles International Airport, where he was arriving on a private plane from Barbados, NBC News reports.

He had been on holiday with his girlfriend, Rihanna, who is currently pregnant.

Mayers was wanted in connection with a shooting on 6 November last year after an argument escalated, authorities said.

Mayers is accused of firing a handgun at an acquaintance, who sustained a minor injury and later sought medical treatment, police said.

Mayers’ RCA Records publicist and attorney did not immediately respond to requests for comment.

A$AP Rocky is scheduled to support the Red Hot Chili Peppers on 22 June in Manchester and he is on the line-up for Wireless Festival in London in July.

He is also set to support the Red Hot Chili Peppers in Germany later this year.