A1 crash: Drunk driver jailed after ploughing over bridge on to motorway leaving passenger in a wheelchair 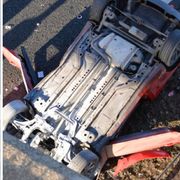 A drunk driver has been jailed after crashing into a bridge above the A1(M) in Durham before falling on to the motorway below – leaving a female passenger in the car with life-changing injuries.

Hugh Raymond Holmes, 32, hit the A177 flyover causing the car to teeter perilously over the dual carriageway on 21 January.

The car landed on its roof on the central reservation of the motorway, narrowly missing both carriageways, Durham Crown Court heard.

Moments earlier Holmes careered through a set of red traffic lights then collided with a van, veering across three lanes of traffic before ploughing through the crash barrier at the Bowburn interchange.

Holmes, who was banned from driving at the time, took the red Vauxhall Astra from the victim’s son.

He kicked the door open after the crash and fled the wreckage, leaving the passenger trapped inside – but was intercepted by a member of the public.

She suffered a broken neck, multiple spinal fractures and a bleed on the brain and continues to use a wheelchair three months later, prosecutor Robin Patton told the court.

Holmes, from Spennymoor, County Durham, tried to blame the victim – telling police and witnesses she had been driving and had stolen her son’s car.

Minutes before the crash Holmes was involved in another near miss, when he overtook another car at speed on a single carriageway, narrowly avoiding a Jeep travelling in the opposite direction.

Jailing him for 32 months, Judge Ray Singh told him: "Your behaviour was utterly despicable.

"The only thought you had was for yourself – no-one else."

Holmes was also banned from the road for 343 weeks – more than six and a half years.

He pleaded guilty to aggravated vehicle taking, causing serious injury by dangerous driving, driving without insurance and failing to provide a specimen of breath.

When a police officer asked if he was willing to provide a breath sample, the court was told Holmes replied: "Am I f***."

Paul Rooney, mitigating, said Holmes has apologised to the woman and she "appears to have forgiven him".

A Durham Police spokeswoman said: "Not only did Hugh Holmes knowingly take a car without permission, but he was also completely unfit to be behind the wheel.

"His reckless actions resulted in horrific injuries for his passenger which will affect her for the rest of her life."