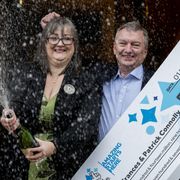 A multimillionaire who claims she is ‘addicted to helping’ has given away more than half of her £115m lottery winnings and busted her budget for the next decade.

Frances Connolly revealed she agreed a charity budget with her husband Patrick, but has already donated £60 million- what they would have given by 2023.

The 55 year-old added: "Helping others, whether with money or by volunteering time, lifted people’s spirits during lockdown.

"It gives you a buzz and it’s addictive. I’m addicted to it now."

The Connollys won in the 2019 EuroMillions and distributed bundles of cash immediately to friends and family using a list she prepared before winning as she believed it would happen.

Mrs Connolly, a former social worker and teacher has set up two charitable foundations, one after her late mother Kathleen Graham and the other PFC Trust in Hartlepool where the couple lived previously.

The couple who have three daughters bought a six-bedroom house in County Durham after their win as their biggest expenditure.

Mrs Connolly scoffed at the idea of spending £25,000 on a bottle of champagne after seeing it on a TV show and said she immediately thought that could have put a young person on the property ladder.

Read more:
Footballers and celebrities to be banned from gambling adverts under new rules
Camelot set to lose licence to run National Lottery after three decades

On Saturday the mother of three organised a gala fundraiser which raised more than £100,000 for the PFC Trust that supports local young carers, elders and refugees.

Although she cannot "cure poverty" on her own, Frances Connolly hopes her trust will get the backing of other people.

She added "I’m not being funny, I’d have been a millionaire anyway if I took back all the money I’ve given away over the years."