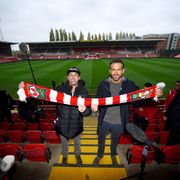 Ryan Reynolds and Rob McElhenney have been honoured for promoting Wales and the Welsh language.

The Hollywood actors and Wrexham AFC owners were handed the Diolch Y Ddraig (Dragon Award) by the Welsh government, the Welsh FA and TV channel S4C at an event in New York.

Accepting the award, Reynolds said: "We are so humbled by the fact that the people of Wrexham and the nation of Wales have entrusted us to tell your story."

McElhenney added: "These last two years have been the real honour."

The It’s Always Sunny in Philadelphia creator then challenged Reynolds to speak Welsh.

McElhenney also told S4C that in owning the North Wales football club, the pair "wanted to spread the word of not only the town itself but of the entire culture".

He said: "We talked to a lot of people who truly do not know enough about Wales. It’s a great opportunity [to promote it] on the global stage."

The pair invested £2m in the club as part of the terms of their purchase in February 2021.

They also donated £10,000 to a crowdfunder after the death of a player’s child. And Reynolds sent a message to six-year-old cancer sufferer Leland, the son of a rival team’s player.

Reynolds and McElhenney have explored the history and culture of Wrexham in their hit TV series Welcome To Wrexham.