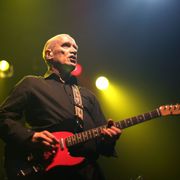 The guitarist and songwriter was a member of rock band Dr Feelgood in the 1970s, joined Ian Dury’s band The Blockheads in the 1980s, and also had a successful career with his own group The Wilko Johnson Band.

After being diagnosed with what was initially thought to be terminal cancer in 2013, he collaborated with The Who’s Roger Daltrey on an album called Going Back Home, which went to number three in the UK charts the following year.

In an interview, he said he thought it would be the "last thing I ever did".

Game Of Thrones fans will also known him from his appearance as the mute Lannister executioner Ser Ilyn Payne in the hit series.

He died at home on Monday.

A statement shared on social media said: "This is the announcement we never wanted to make, and we do so, on behalf of Wilko’s family and the band, with a very heavy heart: Wilko Johnson has died. He passed away at home on Monday evening, 21 November 2022.

"Thank you for respecting Wilko’s family’s privacy at this very sad time, and thank you all for having been such a tremendous support throughout Wilko’s incredible life. RIP Wilko Johnson."

Johnson had previously been diagnosed with pancreatic cancer but said in an interview with The Northern Echo in 2019: "It seems very unjust but I’m in the clear and feeling pretty healthy other than I’m missing a pancreas but apart from that I’m really fit."

He had recorded an interview with the Blues In the Night podcast which was released just days before his death, and was playing live up until October.

Born on Canvey Island in Essex in 1947, the musician graduated from Newcastle University before travelling around India, then returned to Essex to work as an English teacher. Not long after, he formed Dr Feelgood, hugely influential pub-rock pioneers who paved the way for punk.

He released his autobiography, Looking Back At Me, in 2012, and another memoir, Don’t You Leave Me Here, in 2016, following his cancer diagnosis – writing about how he decided "to accept his imminent death" by touring.

Following the announcement of Johnson’s death, musician Billy Bragg described him as "a precursor of punk" and said: "His guitar playing was angry and angular, but his presence – twitchy, confrontational, out of control – was something we’d never beheld before in UK pop. Rotten, Strummer and Weller learned a lot from his edgy demeanour. He does it right RIP."

Blur’s Graham Coxon described him as "one of my all time tele heroes", while The Charlatans’ Tim Burgess simply posted: "God speed Wilko."

Broadcaster Bob Harris shared a photo of the pair together, and said: "So sad at the passing of the great Wilko Johnson. I first saw Dr Feelgood at the Hope & Anchor in 1974 and they did their first ever radio session on my @BBCR1 show a few days later.

"Wilko was absolutely unique. His energy and spirit were incredible."