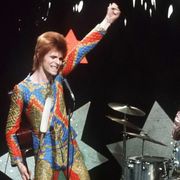 The UK singles chart – famous for its top 40 rundowns, Christmas number ones and artist rivalries – is celebrating its 70th birthday.

Once a key part of British life, the chart has given music fans countless enduring moments such as watching the remarkably quick growth of The Beatles, the arrival of artists such as David Bowie, Elton John and Queen and the coveted annual festive favourite.

But the days when the nation crowded around the radio to listen to the latest new entries or biggest risers and fallers has mostly dwindled with the charts not seen as anywhere near as relevant as they once were.

If an artist went to number one in the decades after the chart’s 1952 inception, it would guarantee them household name status, at least for a while.

With the new millennium came streaming and downloads and the end of big music shows such as Top Of The Pops.

The times were changing and the charts would never quite be the same again. Even the weekly radio rundown was eventually moved from its once unmissable Sunday slot to a Friday as listener figures fell.

As some observers have asked, when was the last time you could name a string of Christmas numbers ones or even know who was top of the charts?

Such questions were once easy to answer.

It was in 1984 when Band Aid’s Do They Know It’s Christmas became what was then the fastest-selling single in history, showcasing the power of the chart as it helped to spread the song’s vital message to help people in famine-hit Ethiopia.

Singles came with promotion and fanfare – A and B-sides which aimed to capture the public imagination, but which streaming has all but extinguished.

Analysis of the songs to reach number one across the decades has shown a long-term trend towards more hits in minor keys, while time signatures are increasingly four beats in a bar.

Changes in taste help explain some of the trends, though "the advance of technology and new ways of working in music" are also likely to be responsible, experts said.

Tim Wall, professor of popular music at Birmingham City University, said there was a move away from "classically trained professional songwriters providing hits for artists, to self-composing groups – such as The Beatles – and then to people who create music on technology which they can control, who don’t ever think they need to change the key".

As of this month, there have been 1,404 singles to top the chart while it now takes on average just under seven million streams to land a number one single.

The days of waiting at a record store to buy your favourite new song might be gone – there have been 179 singles to reach a million sales – but the chart has still provided memories to "chronicle it all".

"Since that time, from the era pre-rock & roll right up to the present day, there is barely a facet of life that hasn’t changed – and the official singles chart has been there to chronicle it all."