She Said: Journalists who helped bring down Harvey Weinstein ‘flabbergasted’ to see their work turned into Oscar-tipped film 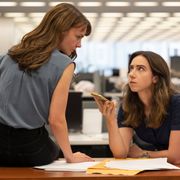 The film She Said shows the efforts that went into Megan Twohey and Jodi Kantor’s Pulitzer-prize winning journalism in 2017 which exposed Harvey Weinstein, then one of Hollywood’s most influential producers, as a sexual predator.

Their work brought about a global reckoning on the sexual abuse of women with the #MeToo movement.

"It was rockstar crush stuff…Zoe was in New York and met [them] in person originally, I was still in the UK and so my first meeting was on Zoom, but I was hugely intimidated.

"Not that they’re intimidating people," Mulligan laughs, "they couldn’t be more lovely, but they are just so impressive, I think we just both wanted them to be happy!"

Shot in the actual New York Times newsroom and with the pace unfolding like a thriller, the film follows the efforts of the journalists to persuade scared sources to go on the record.

Kantor says she and Twohey were "just flabbergasted" to see their investigation turned into a film.

"We started out by investigating a Hollywood producer, so we’re still a little confused about how likenesses of ourselves ended up on the big screen but listen, we’re really moved by it.

"One of the messages of this story, especially as time recedes, is that the number of people who really gave us publishable information about Harvey Weinstein was so small. In the end, we’re talking about like a conference room worth of people and yet look at the impact they had worldwide."

Mulligan – who’s widely tipped to be Oscar-nominated for the role – says few "could have anticipated what the impact would be" but, in terms of the film industry she says she’s seen "lots of concrete changes" as a result.

"Codes of conduct, workshops that are for the whole cast and crew that talk about what is expected on set in terms of behaviour – that never existed before," she explains.

Speaking of how intimacy coordinators are now considered "crucial", the actress says "we did this for a long time before that was a thing and it’s still sort of shocking to look back and think that was never in place before, it just seems like such an obvious need on a film set."

Mulligan says the movement the article triggered has even influenced how scripts are written nowadays.

"The way the female characters are described in screenplays now, it’s not perfect but there’s definitely there’s a big shift from, you know, ‘Gorgeous girl in a bikini, beautiful but she doesn’t know it…’ you’re seeing markedly less of that, which I think is very welcome."

She Said is out in cinemas on Friday.