Religious programme obligations could be eased under broadcasting shake-up 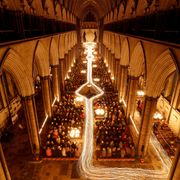 Rules about how much "public service content" such as gardening or religious programmes must be shown on "linear" TV will be relaxed as part of a broadcasting shake-up planned by the government.

The changes – which also relate to quotas on content made outside London – will allow the BBC, ITV and Channel 4 "greater flexibility" to meet their obligations by showing such programmes online instead.

That means that it might be easier for the BBC, for example, to switch the likes of Songs of Praise or Gardeners’ World away from BBC1 and BBC2 to digital platforms should it choose to do so.

The plans are among proposals being outlined in a new white paper which the government says will help "usher in a new golden age of programming".

They also include more details about the government’s controversial move to privatise Channel 4.

There is also a proposed new "video on demand" code to regulate "TV-like" services such as Netflix and NOW TV – part of Sky, the owner of Sky News – though it is understood not to include YouTube.

Another part of the white paper is designed to strengthen the hand of public service broadcasters in securing "crown jewel" sporting events such as the Olympics, the World Cup and Wimbledon.

The government says it is updating decades-old broadcasting regulations "to give the UK’s vital public service system a deal fit for the streaming age" with more people watching programmes on their phones, laptops, tablets, games consoles and smart TVs and competition for viewers and advertising intensifying.

Their remit under this umbrella currently includes requirements to provide programmes depicting leisure interests such as cooking and gardening.

These broadcasters are required through a quota system to broadcast a minimum level of public service content, including programmes made outside London, on "linear" channels such as ITV1 or BBC1.

The government said it would give broadcasters "greater flexibility to meet their obligations, including reaching audiences by delivering content on a wider range of services including via on-demand platforms".

It said the wider plans reflected a change in viewing habits away from "linear" channels at the same time as subscription services such as Netflix and Amazon Prime increase their share.

These on-demand platforms would be subject to a new code similar to that already governing traditional broadcast content, designed to protect viewers from harmful material such as unchallenged health claims – with fines for breaches up to £250,000 or 5% of annual turnover.

The government said it would scrap a complicated set of "purposes" and "objectives" for public service broadcasters from current laws dating to 2003 to create a simplified definition.

There would be a focus "on creating distinctive shows which reflect British culture, support domestic film and TV production and provide impartial and accurate news", the government said.

Meanwhile, ministers argue that privatising Channel 4 will help it to compete in the new broadcasting landscape, allowing it greater investment and removing a restriction which they say effectively bans it from producing and selling is own content.

But the white paper revealed that the channel will still be subject to obligations to commission to use content from independent and regional producers, to show "distinctive" programmes "that represent the breadth of society" as well as original content and "high quality" news and current affairs.

Culture secretary Nadine Dorries said: "Set against the backdrop of the digital transformation of our viewing habits, today’s plans will revamp decades-old laws to help our public service broadcasters compete in the internet age and usher in a new golden age for British TV and radio.

"This will provide jobs and growth in the future along with the content we all love."