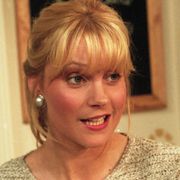 Former Emmerdale star Malandra Burrows has revealed she has stage three breast cancer and is facing six months of chemotherapy.

The actress, who played Kathy Glover/ Tate in Emmerdale for 20 years, has had surgery to remove a tumour from her left breast.

Speaking to OK! magazine, Burrows said she was diagnosed in February after discovering a lump earlier on in the year.

The 56-year-old said doctors had told her that her form of cancer may have been caused by going through the menopause, according to OK!, and that she wants to share her story to encourage other women to get checked out.

"When I got my diagnosis, I felt like I was back in a soap and in a storyline," Burrows told the magazine.

The actress, who also appeared in I’m A Celebrity… Get Me Out Of Here! in 2006 alongside Myleene Klass, Jason Donovan and winner Matt Willis, said she had gone into "combat mode" to fight the disease and that she was taking it "day by day", with doctors not giving a prognosis until she has finished her chemotherapy.

"If I look back, I’ve given it everything I can and that’s all I can do," she said. "I hate to say it, but when it’s your life at stake you’re prepared to do everything to get through. That’s helped me focus."

When she first went to hospital, Burrows said she was told the lump was a cyst. However, a follow-up scan and an ultrasound revealed she had cancer.

Speaking about the menopause, the actress said: "Davina [McCall] has done a fabulous job of bringing menopause to the forefront, but I have never heard of menopausal cancer before."

Doctors told her that "because of the oestrogen and the way your hormonal balance changes" during menopause it can be a cause of breast cancer, she added.

Burrows said she had also considered the possibility of having to have a mastectomy. "There is no point in having wonderful boobs that are your own but you’re pushing up daisies," she told the magazine. "This is saving your life, so if it’s got to be done…"

She added: "You’ve got to look on the bright side. When you see what’s happening in Ukraine, I just think I’m really lucky and all the treatment I’m getting, whether I love it or hate it, is there to save my life."

Burrows said she was due to have a routine mammogram in 2020, but the appointment was cancelled due to the pandemic.

"I have lost friends to breast cancer," she said. "And look at lovely [Girls Aloud star] Sarah Harding – she got caught in the lockdown and everything was delayed.

"Someone asked me, ‘If you’d had a mammogram back in lockdown, how would you have felt knowing you couldn’t have treatment?’ So I felt blessed in a way."