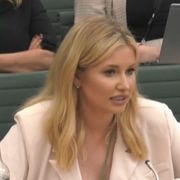 Former Love Island contestant Amy Hart has laid bare the extent of the abuse she regularly receives on social media to an inquiry into influencer culture – saying she has been trolled by everyone from nurses to parents, and received a death threat from a 13-year-old.

Hart, who appeared on Love Island in 2019, said she had become "a bit desensitised" to messages telling her she is "ugly" and "awful" after her social media followers went up from a few thousand to more than a million following her time on the show.

She told the digital, culture, media and sport committee inquiry she has stopped reporting abusive comments to social media companies such as Twitter, Instagram and Facebook because she does not believe they will take action.

Hart, a former British Airways flight attendant, said: "I was getting trolled by nurses and people that have got husbands and children… I don’t understand it."

The 29-year-old said that to have an account on Instagram, you should have to show identification – and for under-16s this should come from their parents.

"One of my death threats was traced back to a 13-year-old," she told MPs. "And you think if that’s what they’re doing at 13, in their bedroom at their mum and dad’s house, what are they going to do when they’re 18 and they’re out on their own."

Later on, she read out one message she had received recently, using the word "bleep" for any swearing.

She said: "Things like: ‘Your new fella will need therapy to deal with you and your neediness, I hope he runs for the hills, he needs to get gone. Poor guy dealing with your bleep fake teeth, fake boobs, fake personality. He deserves to know what a psycho you are. You’re bat-bleep crazy and a loose cannon…’"

Hart continued: "’Get her peroxide fake veneers gone, she’s a fake-ass bleep and she needs to get gone… Get some respect you dirty bleep. Look at the state of you. Absolute waste of organs. Stop plugging you silly, fake bleep. You look plastic, fake-ass bleep’."

This was a woman with a young child, she said.

Hart recounted the abuse she regularly receives online and said she was surprised many of the private messages sent to her did not breach the sites’ community guidelines.

"I am desensitised but I would say that the (social media) networks are not supportive enough when it comes to trolling.

"I have reported some messages before and they come back saying, ‘We have looked at it and it doesn’t break community guidelines’ and I am like, ‘Look at that message!’

"Look at this barrage of messages someone has sent me before 7 o’clock in the morning telling me how much they hate me, how awful I am, why everyone hates me, how ugly I am.

Asked whether it comes with the territory, she said contestants are "quite naive" before going on a show such as Love Island and that nothing can really prepare you for the fame that comes with it afterwards, no matter how much you are told. And that while attention "does come with the territory" of life in the spotlight, "nobody deserves abuse".

During the hearing, Hart said that some people may mock Love Island but that the show reflects modern dating. She also said that in her experience, she received good support following her exit from the show, including eight months of therapy.

The inquiry into influencer culture on social media was launched to look at concerns around the perceived lack of transparency around their adverts and promotions online.

Speaking about influencing, Hart dismissed the idea that it is not a legitimate profession, telling the inquiry: "I used to think it wasn’t a proper job either and it really, really is."