Kurt Cobain’s ‘favourite guitar in the whole world’ could fetch more than £600,000 at auction 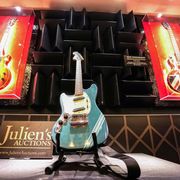 The guitar Kurt Cobain used on the video of Smells Like Teen Spirit – which he described as his favourite "in the whole world" – could fetch more than £600,000 at auction.

The 1969 Fender Mustang, finished in Lake Placid blue, has been on display at Seattle’s Experience Music Project, now renamed the Museum of Pop Culture, for the last 12 years.

Discussing the instrument with Guitar World, Cobain, who was left-handed, said it was "not very easy to find reasonably priced, high-quality left-handed guitars".

But he added: "Out of all the guitars in the whole world, the Fender Mustang is my favourite. I’ve only owned two of them."

The Lake Placid blue example is going in display at the Hard Rock Cafe in London on Friday and will remain there until Tuesday.

It is among a selection of items to be sold at a "music icons" event held by Julien’s Auction House at the Hard Rock Cafe in New York from 20 to 22 May.

Smells Like Teen Spirit was on Nirvana‘s second studio album – Nevermind, released in September 1991 – which charted well across the world.

Also up for grabs will be an exclusive NFT (Non-Fungible Token) of the guitar which features a narration by Cobain’s long-time guitar tech, Earnie Bailey, discussing the instrument’s historical significance.

There is a drawing by Cobain of Michael Jackson wearing a red jacket, single white glove and sunglasses, which also features his signature in the corner.

A portion of the proceeds will go towards Kicking The Stigma, an initiative to raise awareness about mental health disorders.