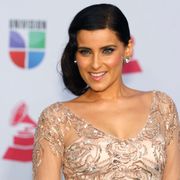 Nelly Furtado, the Grammy award-winning singer, is to become the latest international music star to reap rich rewards from her catalogue by striking a deal with a venture backed by Blackstone, the private equity giant.

Sky News has learnt that Furtado, a Canadian whose hits include I’m Like a Bird, is on the brink of signing an agreement to sell her collection of songs to Hipgnosis Song Management (HSM).

The value of the deal was unclear on Thursday, but analysts speculated that it could be worth in the region of $50m.

It will be the second acquisition struck by HSM since Blackstone announced in November that it was going into partnership with Merck Mercuriadis, founder of the London-listed Hipgnosis Songs Fund.

The first deal was agreed last month with the estate of the late Leonard Cohen.

HSM’s agreement with Furtado will be the latest in a blizzard of music rights acquisitions, with financial investors increasingly attracted to the stable long-term returns provided by music royalties.

The explosion in demand for streaming services has strengthened interest in listening to older hit songs.

In recent months the likes of Pimco, the world’s biggest bond fund, and KKR, Blackstone’s private equity rival, have waded into the sector with new ventures.

Some of the vehicles backed by those investors are expected to seek public listings in due course.