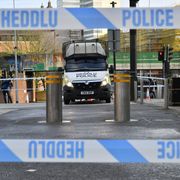 Four teenagers have been arrested after a "large disturbance" in Cardiff left six people in hospital, including some with stab wounds.

Officers received "multiple reports of a violent incident" involving "local youths" on Queen Street in the city centre at around 9.50pm on Saturday.

One person suffered head injuries and was in a serious condition, while three others are believed to have been stabbed.

Four people, aged 16 and 17, have been arrested on suspicion of violent disorder and remain in custody.

A Taser was also used to detain one man who was obstructing officers, but he is not believed to have been involved in the disorder.

South Wales Police have now urged parents who suspect their child was involved to come forward.

Twenty detectives are investigating the incident and trawling through CCTV footage to identify those involved, the force said.

Detective Superintendent Esyr Jones said: "This was a violent and completely unacceptable incident, which has understandably caused alarm within the local community.

"This appears to have been an isolated incident involving local youths, all of whom can expect to find officers knocking at their doors as inquiries progress."

He added: "We are continuing to appeal to anyone who witnessed the incident or who has information which could assist the investigation to come forward.

"In particular, I’d urge any parent who suspects their child was involved in any way to come forward.

"Tackling knife crime is the responsibility of us all and any parents who have suspicions about their children being involved are not protecting them by remaining quiet."

A dispersal order has been imposed in Cardiff city centre allowing officers to tell people to leave the area for 24 hours if their behaviour "has or is likely to contribute to disorder or cause harassment, alarm or distress to members of the public".

Police said the order will be in place until Tuesday morning.